to take part in the

The competition will take place in online (First and Second Round) from 21th till 28th of September 2021 and life (Third Round and Gala Concert) in Sofia, Bulgaria from 9th till 10th of October 2021.
Will be accepted application from violin players from all nationalities born after 27th August 1991.

The jury, which consists of eminent violinists and teachers with international fame, will award the following prizes:

Special awards will be announced later.
All participants will be awarded diplomas of participation

For detailed information on the regulations, applications or the contest in general follow the link:
https://violin-competition.com/en/competitions/sixth-edition-2021/

Download Application Form for participation in the competition in the desired file format – pdf or doc:

Art. 1 The Non-Governmental Association “Club UNESCO Leonardo da Vinci Sofia” organizes the Sixth International Violin Competiton “VASCO ABADJIEV”. The Competition is under Patronage of Ministry of Culture of Republic of Bulgaria, the Honor Consul in Bulgaria of Piemonte and Val DÁosta, Italy – Gianni Maria Stornello, with the financial support of Sofia Municipality and with cooperation of Sofia Philharmony.

Art. 2 The international competition for violinists is a part of the project “Shakona” of Club UNESCO “Leonardo da Vinci” and other initiatives, that has the goal to revive the national and international memory of the great Bulgarian violinist Vasco Abadjiev (1926-1978).

Art. 3 The competition will take place once every two years.

Art. 4 The contest will take place in three rounds. The First and the Second round will be online. The Third round and the Gala-Concert of laureates will be on life in Sofia, with accompanying of piano and symphonic orchestra.

Art. 5 For participation in the Contest could apply violinists from all countries and nationalities, that to the date of opening of the contest are not older than 30 years, e.g. born after 7th of September 1991.

Art. 6 All who wish to participate in the Contest have to submit the following documents by 07.09.2021:

Art. 7 Participation fee should be paid via bank transfer.
/1/ The fee for participation is 50 (fifty) euro or 100 (hundred) leva and is to be paid at the following bank account:

/2/ All bank fees for payment transfers are for the participants.
/3/ The participation fee is non-refundable unless the competition is cancelled.

Art. 9 The documents of the foreign participants have to be in English.

Art. 10 The approved candidates, eligible to this Regulation, will be informed in a written manner by 10.09.2021.

CONDITIONS FOR CONDUCTING THE COMPETITION

Art. 11 The assessment of the participants in the Contest will be based on fixed by Organizers pre-approved list of musical pieces, that should be performed in three rounds.

Art. 13 /1/ The candidates, allowed to enter in First and in Second Round, will be notified with e-mail after the results are announced. For Third Round in Sofia, Bulgaria, the candidates will be informed after their participation in the day of Third Round.

/4/ Bestow of prizes is on the Gala-Concert

/5/ The participation of the laureates in the Gala-Concert is required and pro bono.

Art. 14 The participants should keep their video files in designated folder on a virtual server or drive (such as Google Drive, OneDrive, etc.) till end the Contest. They should give access to this folder to Organizers via shared link to e-mail: club@unesco-ldv.com (in Cc: juliankorabov@gmail.com)

The folder should be in English and should contains:

For the First and Second Round the candidates should send link for access to their video files till 7th September 2021.

Art. 15 The uploaded videos according to Art.15, should be in HD format. No editing or mixing/manipulating is permitted. Each piece should be filmed in one uninterrupted shot from begging to the end of performance. The musician should be pictured in front, from no more than 5 (five) meters.

Art. 16 The Organizers may reject records that do not possess technical requirements of the records. The participants with edited or manipulated records will be disqualified without any rights to appeal.

Art. 17 For Third Round every candidate has to pay for his/her own transport, traveling allowances and expenses for the stay during the contest, insurance and medical  expenses as well as the expenses of all companions and others, if there are such.

/1/ If the participant does not have pianist for the Third Round, such will be arranged by the organizers with additional payment of 25 Euro per round, paid by the participant.

/2/ The participants in Third Round should have scores of their performance.

Art. 18 The performance in Third Round and in Gala-Concert will be filmed by Organizers.

Art. 19 The Gala-Concert, bestowing of the laureates and the performance of all participants in the three rounds, will be uploaded on the internet site of the Contest and will be promoted via media and online.

Art. 20 /1/ The right to participate in the First Round have all violinists that have been approved to take part. The performances in this round will be with a total duration of up to 30 min. They will include:

/2/ The right to participate in the Second Round have the candidates that have been chosen by the jury after the first round. The performances in the second round are with a total duration of up to 40 min. They include:

/3/ The right of participation in Third Round will have these candidates that are approved from the jury after the Second Round:

Art. 22 All compositions are performed by heart /apart from the sonata/.

Art. 23 The candidates perform the compositions that are going to present in the different rounds in the order that they want, and have to include them in the application form.
Art. 24 The announced program is not to be changed. The compositions for participation in all rounds are to be performed in original.

Art. 25 All candidates have the right to rehearse before the Third Round

Art. 26 The Competition is organized and conducted from 10th September 2021 till 10th of October 2021with the following schedule:

– from 08:30 till 10:00 registration of the candidates, allowed to participate and payment of the participation fee. It is conducted by the Secretariat of the Competition in the building of Concert Complex “Bulgaria” in Sofia;

– at 10.30 – formal opening of the competition with a presentation of the International Jury;
– at 11:00 – draw of the lot for the order of participation of the candidates in the Third Round

Date: 10th of October 2021 – Gala-Concert and bestowment of the awards (exact time will be fixed additionally)

Art. 27 In case that Covid pandemic and restrictions do not permit life participation, the Third Round and Gala Concert will not take place on life.

/1/ The participants, approved for the Third Round should send from 27th September 2021 till 23:59 GMT on 05th of October 2021, their video files for Third Round with piano accompanying.

/2/ The records of the pieces for the Third Round with piano, should be selected from the pre-approved repertoire list, that the candidate has sent for the three rounds of the Contest.

/3/ The recorded videos for Third Round, according requirements for the First and Second Round, should be filmed in formal dress code.

/4/ The Gala-Concert, with the recorded videos of the laureates from Third Round, will be announced by the jury.

Art. 28  In this scenario the laureates will be nominated by the Jury after Third Round and officially announced on 09h  of October 2021.

Art. 29 The record from the Third Round and the Gala-Concert with selection from the performances during the First and the Second Round, will be broadcast online from the Organizers, according to Art.19 of this Regulation

Art. 30 The monetary prizes will be sent to the winner via bank account, given by the laureate after deduction of taxes and transfer fees

Art. 31 The Jury consists of music teachers and violinists that are famous internationally.

Art. 32 The evaluations of the Jury are formed by rules, accepted and established by the organizers.

Art. 33 The jury’s decisions are final and could not to be contested.

Art. 34 A member of the jury, who in the last two years has been teaching or has any other relation to a candidate in the contest, must announce it before the beginning of the performance and withdraw from evaluating the respective candidate.

Special Prizes will be announced additionally.

Art. 36 All participants will receive a “PARTICIPATION DIPLOMA” via electronic format.

Art. 37 The jury has the liberty to divide, as well as not to adjudge some of the awards. Other encouraging and special awards, constituted by institutions, private parties and sponsors can be suggested and coordinated with the jury’s opinion and announced additionally.

Art. 38 The organizers preserve the right to introduce changes to these regulations if needed, under exceptional circumstances and situations, and to inform participants in advance.

Art. 39 The participants are obliged to follow all epidemiological measures that are valid to the moment of Third Round and the Gala-Concert.

Art. 40 The organizers do not bear responsibility for any damages of persons and objects, caused on the way to the contest, or during the competition.

Art. 41 By entering the Contest, the participants confirm their agreement with these regulations.

Art. 42 All copyrights are owned by the organizers.

Art. 43 The candidates confirm the acceptance of all the regulations by signing the application for participation in the contest.

Art. 44 Every candidate gives permission to the organizers to store and use personal data, to record their performances and take photographs, register, render and show the concert and parts of it within the media domain, in internet, in printed publications, for the purposes of conducting the contest, advertising and popularization of it, as well as for announcing its results.

Art. 45 Sound and video recordings of the performances are made by authorized persons; the organizers have exclusive rights for their safe-keeping and duplication. Recording by unauthorized individuals, as well as picture taking during auditions is not allowed.

Art. 46 For the interpretation of these regulations the only valid language is Bulgarian.

Hearing of records and rating

Hearing of records and rating

exact time will be fixed additionally

The Program is subject to change

All participants will be awarded diplomas of participation.

The third round of the International Competition for Young Violinists “Vasko Abadjiev” was held on 09/10/2021 in the Concert Hall “Bulgaria”. Candidates who successfully passed the first and second rounds of the competition were admitted to this round.
An international jury consisting of Prof. Janna Gandelman, Prof. Albena Danailova, Prof. Yosif Radionov, Prof. Svetlin Rusev and Mr. Stefan Iliev, after a serious discussion, awarded the following prizes: 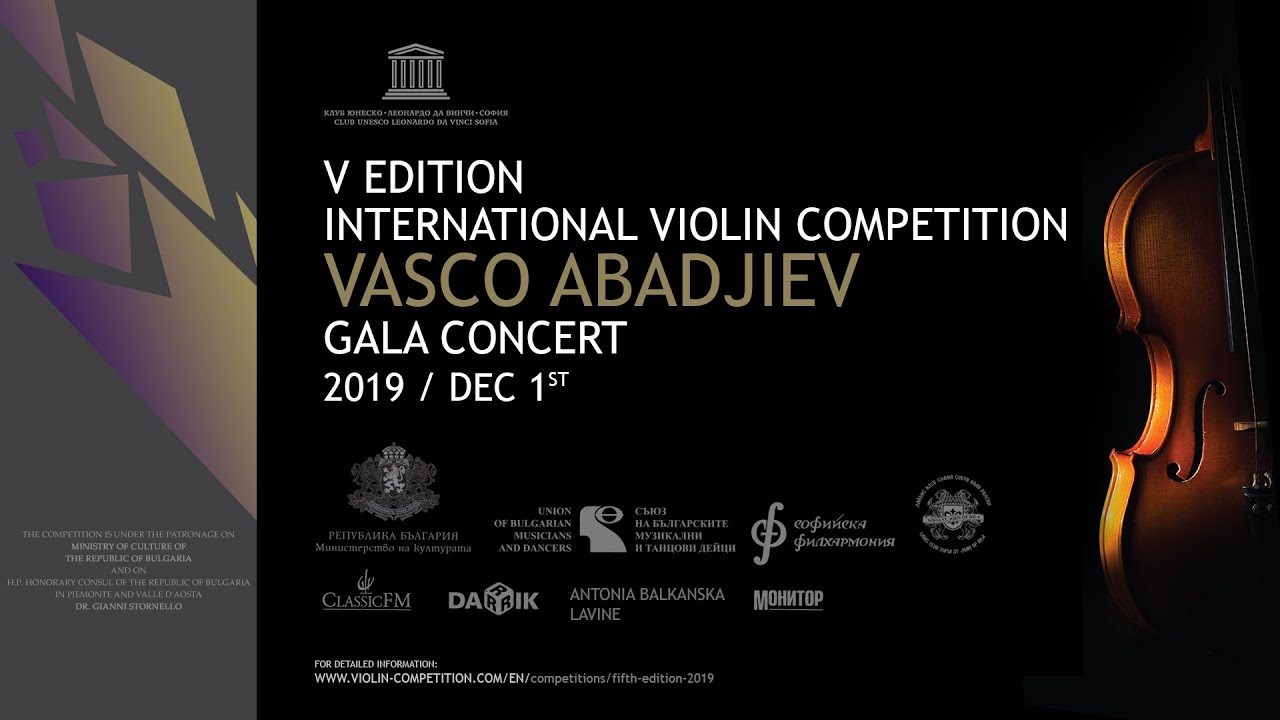 The competition is carried out thanks to: