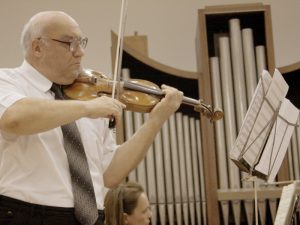 Nedyalcho Todorov is a Bulgarian musician, violinist and professor at the Academy of Music and Dance Arts in Plovdiv.

He graduated the Music High School in Plovdiv, then the State Music Academy in Sofia with violin in the class of Prof. Vladimir Avramov. He then specialized in Moscow with Professor Oleg Krissa.

One of the founders of the Academy of Music and Dance Arts in Plovdiv, he has been teaching for over 40 years (since 1974 he has been an associate professor and since 1987 a professor). He conducts violin and chamber music classes, introduces courses on the methodology of violin education and history of violin art. During the period 1997-2002, he leads the courses at the State Academy of Music in Sofia. He was Deputy Rector (1974-1979 and 1996-1999) and Rector of the Academy of Music and Performing Arts (1979-1983) and also Director of Education at the Ministry of Culture (1983-1991).

Nedyalcho Todorov is active in concerts, started in 1957 with a debut as a soloist of the Plovdiv Symphony Orchestra under the direction of Dobrin Petkov. He is guest of many symphonic and chamber orchestras in Bulgaria and abroad. He has performed recitals and a number of concert cycles (“Old European Music”, “Viennese Classic”, “Sonatas for Piano and Violin by Mozart”, “Sonatas by French Composers”, “Sonatas by French Composers”, “Masterpieces of 20th Century Chamber Music “,” Jubilee Anniversaries of Bulgarian Composers “). He was concertmaster of the Plovdiv Philharmonic Orchestra, the Sofia Philharmonic Orchestra and other orchestras. In 1978 he founded a Plovdiv String Quartet, where he performed numerous concert tours in Bulgaria and abroad.

Nedyalcho Todorov is a winner of high awards, including: “Golden Lira” and “Crystal Lyre” of the Union of Bulgarian Musicians and Dancers, the “Honored for Polish Culture” Order, the Plovdiv Prize, Medenja Chan and others.