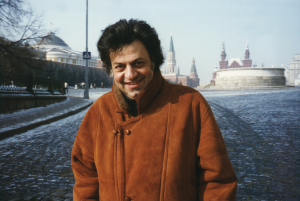 Brilliant performer, remarkable pedagogue and charismatic conductor, Habib Kayaleh figures amongst the most eminent pedagogues of his time. His conception of the violin technique and of its application, and his views on artistic interpretation are highly considered and adopted by important violin schools.

Professor Kayaleh’s fame has also brought invitations to direct masterclasses in world violin institutes, and the acceptance of assignments to shape and mold the musical talents of young virtuosi. Accordingly, he has been the honoured guest of Moscow’s Tchaïkovsky State Conservatory and Academy, Hungary’s Franz Liszt Academy, Georgia’s Conservatory and Music School, Nagoya’s College of Music and Venezuela’s Latino-American Violin Academy, and his teaching in North America was highly ovationed.

Habib Kayaleh is the founder of the Kayaleh Violin Academy, an international violin center which offers stage performance courses for existing and aspiring concert violonists. Ranking amongst the few leading violin schools in the world, it is located in Switzerland, with branches in Tokyo and Montreal.

Aknowledged by the Swiss Ministry of Education as an Official Institution of Public Utility, the Academy acts as home to the Kayaleh Chamber Orchestra, as well as to «The Kayaleh Fondation», a nonprofit organisation that targets the promotion of gifted young artists, and supports the Academy in its functioning and evolution.

Habib Kayaleh was awarded the Paul Harris Fellowship by the International Rotary Foundation for his artistic and human actions, and was selected as an honoured member of the Who’s Who Historical Society, thus testifying to his professional, academic and civic achievements.

“I am happy to learn of the existence of the Foundation Habib Kayaleh, a musician for whom I have the greatest admiration and whom I have known over a long period of years. I trust that this will be of value in the understanding and the enjoyment of both violinists and those whom they enchant with their music.”