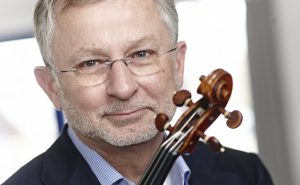 Laurits Th. Larsen was born in a small town outside Odense on the island of Funen. As he showed great interest and talent for musical expression at an early age, however, he began studying at the Conservatory of Music on Funen. In 1975 he was awarded a scholarship from the Jacob Gade Foundation for his violin playing. In the early 1980s Laurits Th. Larsen continued his training in the USA. During his stay, he met a musician who had tried in vain to produce strings for bowed instruments. It would prove to be a fateful meeting.

By 1985 Laurits Th. Larsen was back in Denmark, where he speculated about running a business to supplement his violin playing. He considered several options, but at some point a good friend said to him: “Why don’t you start producing violin strings? Make a good E string!” There was no shortage of dire warnings when Laurits Th. Larsen contacted his musician friend in the USA to discuss the project: “Don’t do it. It’s a miserable business. But I’d like you to get hold of 300 cello strings for me!” Larsen actually promised to try, but quickly realised his folly – high-quality cello strings were simply not to be had. He felt obligated by his promise, however, and threw himself into independent production.

After 18 months of development, Larsen had a string that sounded right. Eminent Danish and German musicians tried the string and they all agreed: “It’s a winner; we’ll keep it.” Rumours of the string with the special sound spread quickly. Before long there were orders from around the world, and the waiting lists grew, as did the company.

The year is now 2004 and a brand new benchmark has been set with the launch of Larsen’s two new Cello C and G medium strings. The idea behind our company is to develop, produce and market globally strings of the finest musical quality for bowed instruments. What drives us is our love of music. Our goal is to enhance the musical experience of the listener. And that’s no small matter. Larsen Strings A/S is now a small, highly focused niche company that produces strings of the finest musical quality for cello, viola and violin.The company trains its own staff and exports  99% of production.